Control Freaks Unite!!! The wife says that I’m a control freak, but I embrace it and we hire many others just like me. Our team enjoys controlling the whole process from the forest to your door, so that we ensure the best final product possible. Today the team is prepping Cumaru and Brazilian Cherry hardwood to go into the kilns at our factory in Brazil. After being dried in the kiln the rough sawn blanks head to our production lines to become decking, T&G flooring, and deck tiles. You can see the kilns in the background with the aluminum doors. Our Brazil factory has 11 kilns which hold 45,000 board feet each. The kilns are monitored by a team of 4 boiler operators and a kiln drying specialist on a 24/7 schedule. Talk about babysitting!!! Our team monitors the process onsite, everyday of the year.

Small, Medium, and Large. Making a variety of Massaranduba hardwood deck tiles at our factory in Brazil today. 12”, 20”, 24”, and we even make some larger ones upon request. This is the easiest way to dress up an ugly concrete patio or rooftop as you don’t need to build a joist structure like a traditional deck. These turn dark brown like Ipe after being outside for a few weeks, yet they are a fraction of the cost.

End matching Tigerwood decking shorts to become parts for the creation of wholesale tigerwood deck tiles. An end matcher precisely cuts flooring and other components to an exact length. The end matcher can cut a square cuts on the ends to a precise length and also round over, bevel, T&G, or cut any other end profile needed. We run several different types of end matchers that are capable of producing containers of parts everyday. This one lives at our Brazil factory along with one that is much bigger and one that is smaller….its our middle child..

Cutting FSC certified Tigerwood logs at our sister mill in Brazil. These logs will be cut into wholesale live edge table slabs, decking, deck tiles, cabinet grade lumber, and interior hardwood flooring. From our sawmill, they will head to Advantage Florestal to our nearby kiln drying operation, then onward around the world to awesome projects near you. 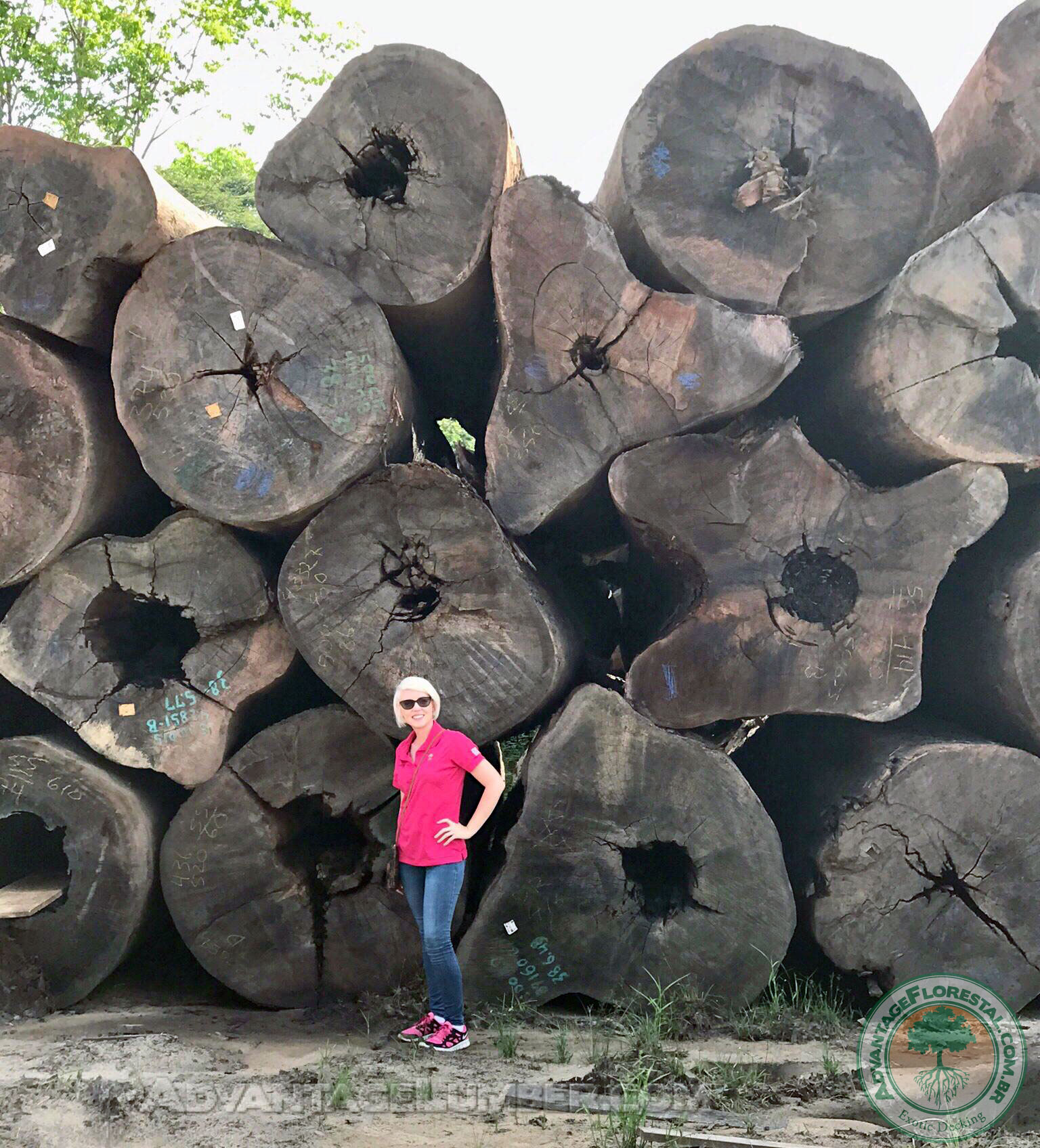 Can you see that little pink thing down at the bottom? 🔍

That’s me standing next to some MASSIVE Angelim logs at our company owned sawmill in Brazil. Soon they will be milled into slabs and other wholesale hardwood lumber products to be sent to our Florida location!

I cant wait to see whats inside!!!

Contact our international department for wholesale container loads direct from our finishing mill in Belem, Brazil.

We are proud to present our newest addition: Lumber Queens! Many lumber dealers boast that they buy directly from the mill. We took that idea a few steps farther and bought the mill. Our new sawmill in Brazil is located just a few miles up the river from our existing kiln-drying and finishing plant. 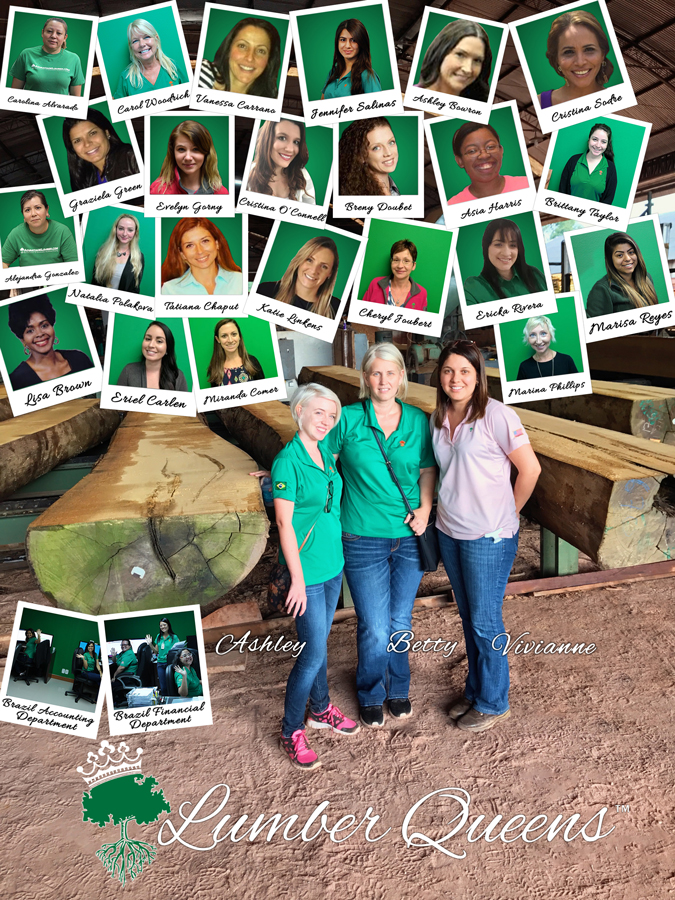 The Queens of the Lumber Industry, Vice-president Betty Pelc said, “I chose the name to highlight and honor the rapidly rising role of women in our company and the industry. For centuries, the industry has been dominated by men, and for the most part, they have done a fine job, but I think women have some long-overlooked ideas for production, distribution, treatment of workers, and ecology that will surely change the way things get done.” The facility is overseen by our South American director Viviane Peixoto, and exports are handled by our US-based import / export manager Vanessa Carrano. We are building a power team that happens to include a lot of women, and things are changing in exciting ways. The Lumber Queens facility houses two separate sawmill lines that process a combined 34,000 board feet of hardwood lumber per shift. There’s a port for receiving barges carrying up to 850,000 board feet of logs at a time. The grounds also include a 10-acre log yard that stockpiles up to 3 million board feet of logs, allowing production to continue throughout the rainy season.The rough-sawing facility employs approximately 40 local workers in addition to the 120 employees at our existing kiln-drying and finishing mill nearby. Just like all of our other facilities, our new rough sawmill is FSC-certified. Our new mill provides rough blanks for processing at our kiln-drying facility, where we produce exotic decking, deck tiles, hardwood flooring, beams, live-edge slabs, turning blanks, industrial lumber, cabinet-grade hardwoods, and other FSC-certified wood products. All of the material processed at our facility is responsibly harvested from well-managed forests.

Trucks filled with logs ready to be milled at our Brazilian sawmill!

Here is a log ready to be milled into blanks.

Cutting slabs from a log is the first step in the milling process. 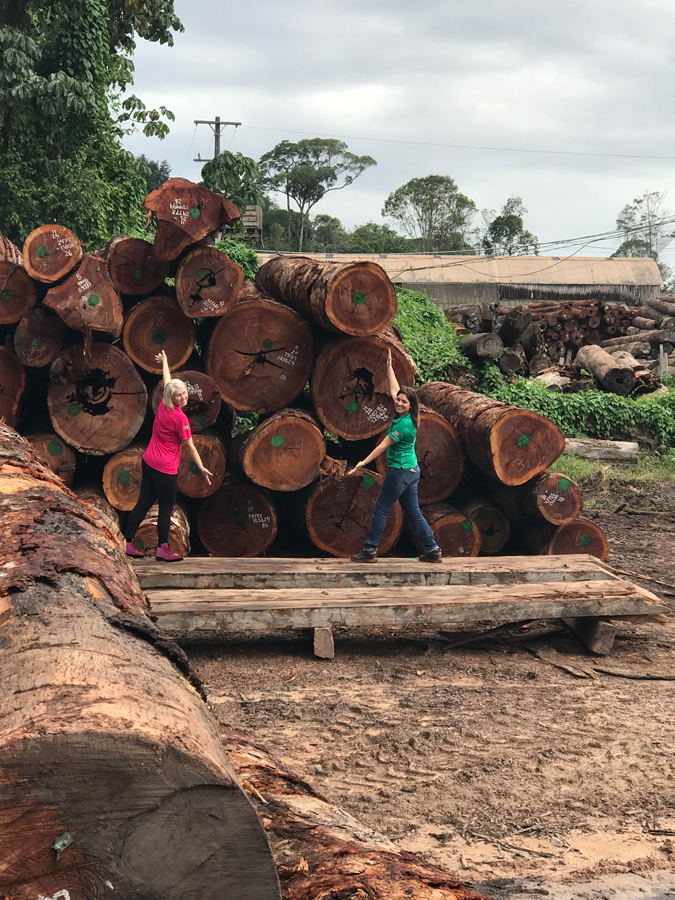 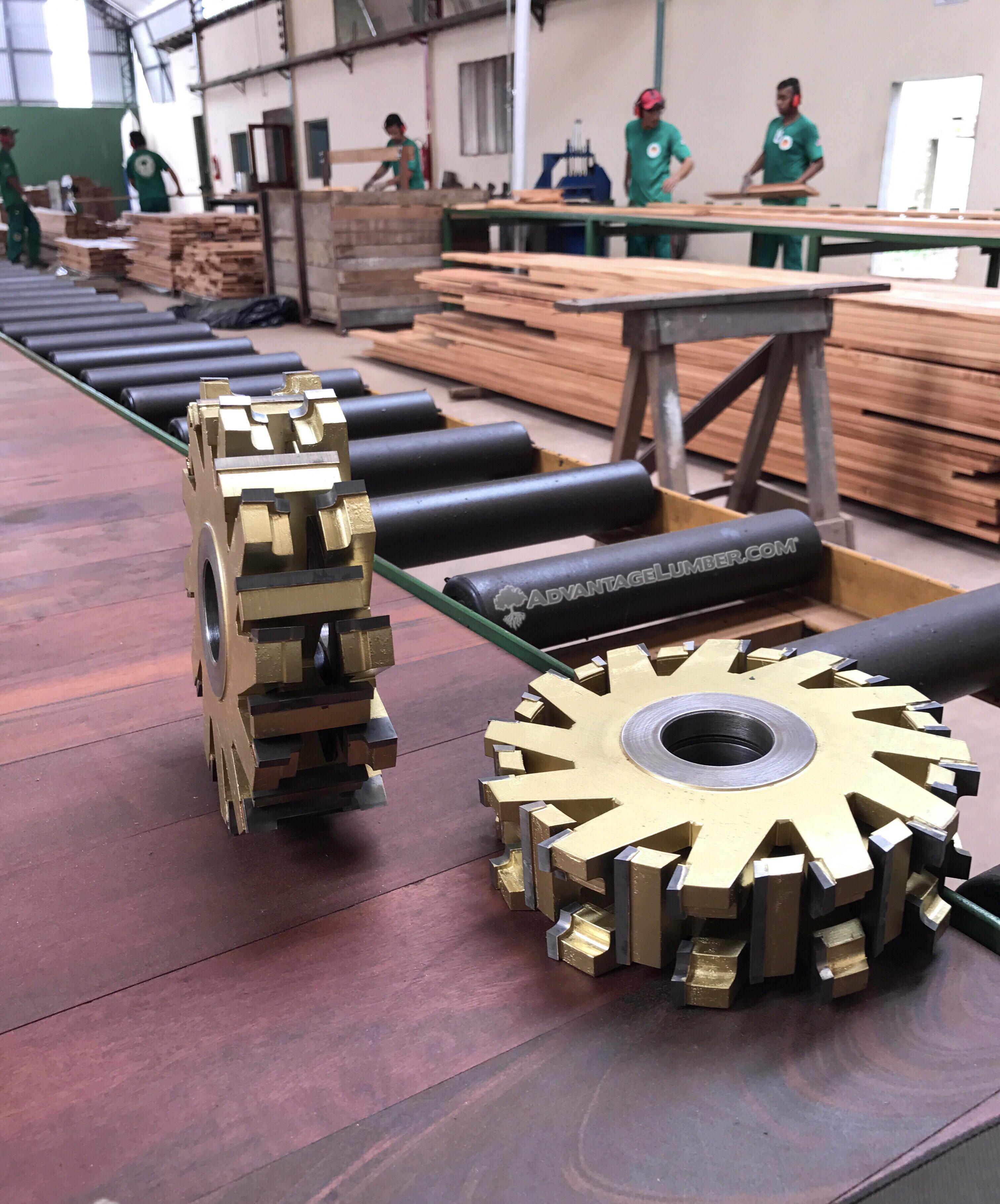 Sexy Cutterheads for making hardwood decking at our mill in Brazil. These massive cutters slice through hardwoods like Ipe, Cumaru, Brazilian Cherry, and many other very dense exotic species all day long at our production facility. We always try to invest in the highest quality toys 🙂

It takes tough tools to work with exotic hardwoods. When producing exotic hardwood lumber products, the quality of the tooling makes all the difference especially when milling wholesale quantities of hardwood decking at the speeds which we do only the highest quality cutter heads will hold up to the exotic hardwood species and the high-speed processing. 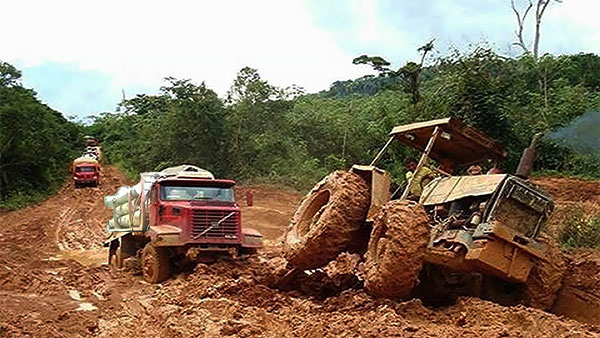 Tropical regions, such as the Amazon rainforest do not have the typical seasons like spring, summer, fall, or winter. Rather, the seasons in the Amazon are divided into two seasons, the dry season and the wet season, each lasting about half of the year.

In the Amazon, the wettest part of the rainy season occurs from December through to May. During the wet season, the Amazon rainforest receives an impressive 6 to 12 feet or more of rainfall. During the driest part of the dry season (June through August) the Amazon rainforest receives an average of only about 6 inches or less of rain. During the wet season, in which the largest amount of rain falls, this can cause the Amazon River to rise and fall by as much as 40 feet or more. The annual rise in the river’s water level causes vast flooding throughout the Amazon river basin.

During this rainy season, the forest replenishes itself with nutrient-rich soil.

In some areas or the Amazon the River floods twice a year as the rivers from the Peruvian Andes and then the Ecuadorian Andes swell and then exceed their banks after dramatic amounts of seasonal rainfall. The river water, saturated with sediments floods the surrounding forest under 20 – 30 feets for periods up to ten months of the year, affecting a swath of land up to 13 miles wide. The deposition of the nutrient-rich suspended solids in these rivers replenishes the mineral nutrients across the forest floor, rendering the ground very fertile, a property not found in the Amazon uplands.

The trees in the Amazon rainforest have learned to adapt to this seasonal flooding. Many trees in the rainforest have developed bark that doesn’t rot. This way when the water inundates the forest floor, the trees are still able to endure the base of the tree being submerged. In addition, some trees anchor themselves to the forest floor by using buttress roots, which are large lateral roots that extend out from the base. Rainforests have a shallow layer of fertile soil, so trees only need shallow roots to reach the nutrients. yet, since shallow roots can’t support huge rainforest trees, many tropical trees have developed huge buttress roots. These stretch from the ground to 6 feet or more up the trunk and help to anchor the tree to the ground. These structural roots prevent the tree from falling over and aide in gathering more nutrients. They also happen to give Rainforest trees their signature look.

IPE is one such tree and is a very popular decking choice. You can only harvest Ipe trees a few months of the year due to the rain in the forests of Brazil. Once the rains stop, the mud and challenges and difficulty of moving heavy loads of lumber begins. The backcountry of Brazil has no paved roads. Instead, try to imagine the worst dirt road in the US. If you try hard enough, you will not even come close. The back roads of Brazil can be outright dangerous if you have seen that TV show on the worlds most dangerous roads you will have an idea of the risk involved and the extreme driving skills needed in getting this precious wood from the mill in Brazil to your project location.

During the rainy season, we turn our focus to manufacturing our premium eco-friendly line of hardwood flooring and milling the stockpile of logs we have on-site filling the warehouse for the upcoming spring deck building season.

Our Real Wood Deck Tiles are inexpensive and easy-to-install.

A sneak peek into our deck tile production lines at our FSC certified Brazil Mill.

Our deck tiles are also often called interlocking wood tiles, elevated decking, wood tiles, decking tiles. Regardless of what you call them they make a beautiful addition to your outdoor living space. We manufacture our deck tiles from a variety of species and manufacture them at our wholesale Brazilian mill. Since we are the saw mill, deck tile manufacturer, direct distributor, and exporter. We can offer you direct from the mill wholesale pricing on bulk orders. Our FSC Certified Brazilian mill has the capacity to fill your order and our international logistics team has the experience and knowledge to get it there.

Many of our customers prefer to install Advantage Deck Tiles over cracked concrete patios. As you can see from the gallery below, doing so will give you an eyesore you no longer have to live with! Why Advantage Deck Tiles™ are Perfect for DIY Projects 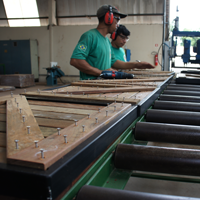 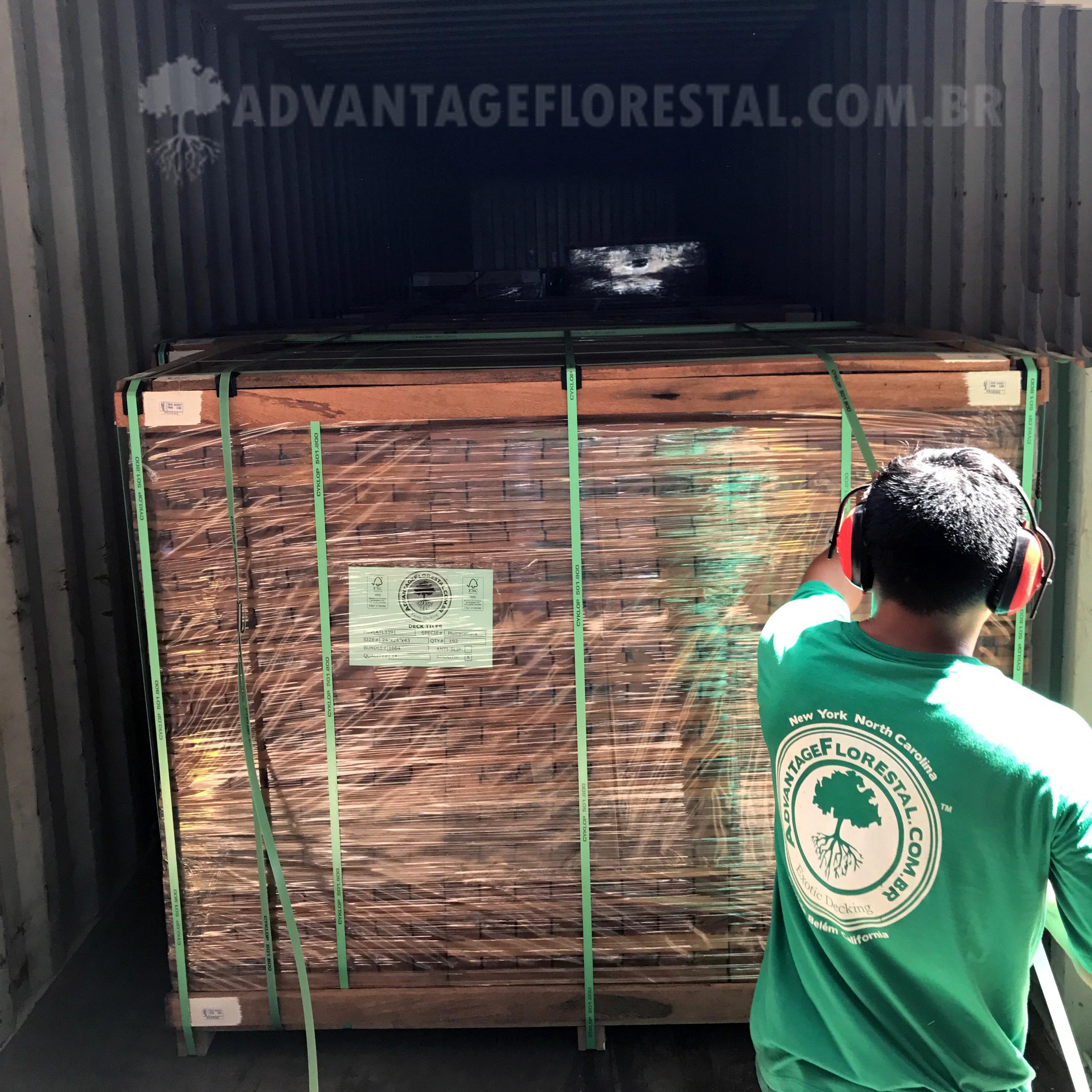 More Info Get A Quote